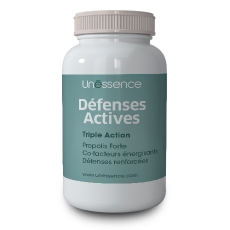 Défenses Actives (Active Defenses) is a complex specially developed to strengthen and energize our natural defenses. It includes three major plants concentrated in active ingredients that act in synergy:

Défenses Actives acts as a natural shield to stimulate in number and vigor the different actors of our natural defenses.

Propolis is an exudate made by honey bees. They make propolis to protect the hive from aggression, various micro-organisms, invaders and bad weather. Propolis has been used for centuries, notably by the Egyptians, Incas, Greeks and Romans. It stimulates the response of the body's natural defences following aggression by micro-organisms.

Propolis represents a natural shield that stimulates the recruitment of the various actors that make up our natural defences, such as macrophages and leukocytes, which are the body's real scavengers. The flavonoids of propolis stimulate the vigour and the number of the various components of our defences.

The value of propolis is measured by its flavonoid content. Propolis Unessence contains 10% flavonoids and galangin, a flavonoid with important antioxidant and protective properties. Many propolis do not contain flavonoids and cannot exert a significant action.

The flavonoids in propolis make it possible to shorten the sequence of reaction of the organism following an aggression and to close it. An aggression that lasts in time, following an insufficient response and defences, compromises, weakens and directs the reaction of the defences towards a more aggressive and destructive response on the tissues. The flavonoids of the propolis will solicit the recruitment of certain actors of our defenses to the more adapted action, targeted on the cause and the intruder in order to allow a resolution which will allow a regeneration and epithelialization of tissues.
The flavonoids of propolis redirect the excessive and destructive reaction of certain actors of our immunity.

Olive leaves are an important source of protective antioxidants on the cells and tissues of the body. They produce phenolic components and use it for their protection. There are more than 8,000 polyphenols in nature. Phenols allow the leaves to act and eliminate insects, larvae and various micro-organisms.

Olive leaf extract regulates the formation of free radicals, oxygen species used by micro-organisms to grow. The leaf of the olive tree contains more antioxidants than the fruit. The most studied polyphenol, oleuperein reinforces the natural defences of the organism and the different actors that compose it. It regulates the development of many micro-organisms.

Oleuperein protects cell membranes from aggression and structural changes. It regulates the activity of leukotrienes, internal components that chronically self-sustain aggression and oxidation of the cells.

Oleuperein regulates the balance of the flora by avoiding intestinal dysbiosis, translocation; improves and avoids the porosity of the membrane of the intestine thus avoiding translocation and the passage of micro-organisms on both sides of it.

The Juglans régia is a tree, a variety of walnut tree. It survived the Ice Age and developed in isolated areas of Asia. Genetic analysis, study of pollen fossils shows the presence of Juglans régia in the Balkan region and Western Europe.

The traditional and current use of the Juglans Régia throughout the world testifies to its effectiveness in strengthening in number and vigour the various players that make up our defences. It is a major player and initiator of the response to the weakening of the organization's resources. It has a broad spectrum of action and boosts the vital energy of the organism which can be compromised during aggressions. The Juglans Régia notably protects the intestinal sphere. It regulates the content and distribution of the different flora, species and subspecies.

The main active ingredient and polyphenol in the leaves of the juglans regia, juglone, has antioxidant and protective properties similar to SOD (superoxide dismutase - the main antioxidant found in each of our cells or intracellular).

The Juglans Régia traps the action of the most aggressive free radicals that cause damage to cells and our tissues: hydroxyl radical, superoxide radical, hydrogen peroxide, nitric oxide (NO).

It also reinforces the levels of the 3 major protective and detoxifying antioxidants in each of our cells:

Juglone acts on many microorganisms.

The Juglans régia protects the intestinal sphere in particular. It regulates the content and distribution of the different flowers, species and subspecies.