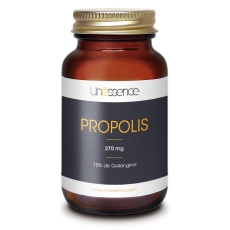 Propolis is a natural resin made by bees from the harvest of various plant elements and buds to which they add their internal enzymatic secretions for the construction, protection and repair of the hive. Propolis represents a protective barrier against external elements (insects, bad weather).

Propolis Unessence is rich in 10% Galangine, a flavonoid with protective and stimulating properties of the body's natural defenses. The percentage of Galangine present is important and very rare and is a sign of a high quality and efficient Propolis. Propolis rich in galangin is a real help during winter episodes and on all tissues attacked and weakened by micro-organisms.

Used by the Egyptian civilization for the embalming of the dead, propolis was also highly prized by the Inca, Greek and Roman civilizations to detoxify and strengthen attacked tissues.

The first scientific study was carried out in 1928. In the last 30 years, more than 2500 scientific articles have been published on propolis.

Propolis has been studied by many great scientists, such as Pr Rémy Chauvin, French biologist and entomologist, specialist in insect behaviour, as well as Dr John Diamond, creator of behavioural kinesiology, who validated the use of propolis during kinesiology tests in his patients, to strengthen the thymus (immune gland and interface between body and mind).

It should be noted that bees have been present on our earth for more than 125 million years.

Propolis regulates the main markers of cellular and tissue reactions to aggression:

Arachidonic acid cascade: saturated fatty acid constituting membranes of our cells and substrate for the manufacture of pro-inflammatory molecules.

The content of saturated and trans fats in our diet determines the level of inflammation in the body.

During a tissue aggression, the results show that after 14 to 21 days, propolis allowed the recruitment of essential growth factors and their migration on the aggressed areas and tissues to allow their re-pithelization.

Propolis rich in galangin has a detoxifying action by acting on microorganisms.

Scientific studies show that galangin acts on a unique and natural mechanism called "autophagy" of selection and detoxification of used cells.

Autophagy is a natural mechanism that is highly studied by scientists and is regulated by the cell. It has a self-digestion and self-destruction mechanism when its functioning or viability (survival) is no longer assured.

Fostering and stimulating autophagy represents a relevant therapeutic option and strategy for researchers in the fight against destabilized, aggressive, non-viable cells for the organism.

Autophagy is a system of intracellular degradation of the cytoplasm, accompanied by organelles that are sequestered in vesicles, called autophagosomes. These will transmit the debris to the lysosomes so that it can be permanently degraded or recycled.

This mechanism removes a significant amount of cellular stress and toxin overload from the cell and the body.

Autophagy is important in the life cycle of the cell, in its development and differentiation. It allows the maintenance of tissue coherence and the emergence of cellular vital energy.