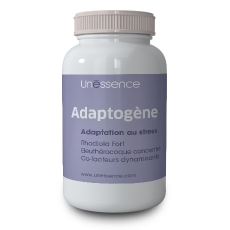 Adaptogen is a complex specially developed by Unessence to combat stress and provide energy. It was designed for anyone whose physical, energetic and emotional resources are weakened and who wishes to regain balance and gain mental and physical energy.

Adaptogène brings together three plants that have been tried and tested over a long period of time, are effective and highly concentrated to restore balance to physical, energetic and emotional parameters disturbed by physical activity, work stress and a drop in natural defences:

Adaptogen was created according to the concept developed by scientist Lazarev. He conducted scientific studies in the 1950s and 1960s to describe the innate and non-specific response of the body to physical or emotional stress. Adaptation to stress expresses the body's response to an unusual demand (physical, emotional) and the use of the body's resources to meet that demand.

Hans Selye, renowned scientist and initiator of the concept of stress, has defined the general stress adaptation syndrome in 3 phases:

Adaptogen avoids the exhaustion phase, prolongs the resistance phase by keeping physical and emotional capacities and resources intact. It allows resilience of body and mind.

Rhodiola Rosea is an adaptogenic plant originating from Northern Europe (Norway, Russia, Scandinavia) and Asia. Rhodiola has established itself for several years as a real anti-stress and a major energizer. It is as much for the body as for the mind. It increases our energy reserves and enables us to cope with difficult physiological and emotional situations. It allows us to remain calm even in stressful situations while maintaining our lucidity.

Salidroside is the active ingredient essential for the stimulation of markers of adaptation to stress:

Rhodiola increases the body's resistance capacity. It allows adaptation to emotional stress by the secretion of dopamine, serotonin and endorphins, molecules of cerebral well-being. It also allows the production of energy and fuel reserves available for our cells, unlike coffee which depletes our energy reserves and exhausts the adrenal glands.

Eleutherococcus is a root originating from northeast Asia (Himalayas and Vietnam) and Russia. It has been used in the Russian pharmacopoeia and by the traditional Chinese health care system for more than 2,000 years. Numerous scientific studies have shown the regulatory properties of Eleutherococcus. Studies carried out in Russia since the 1950s and then throughout the world have made it possible to evaluate its regulatory action on the energy saving achieved by the body in the face of external demand. Eleutherococcus has been used by factory workers, top sportsmen and women as well as by people lacking vitality.

In the United States, Eleutherococcus's popularity alone accounts for 3% of the global plant market.
Eleutherococcus is an exceptional anti-stress and anti-fatigue agent indispensable for intellectual work as well as for physical activity.

The value of Eleutherococcus depends on its richness in active principles called "Eleutherosides". These represent the most important natural molecules capable of modulating a response of the organism.

Eleutherococcus Unessence contains 2% Eleutherosides. This represents a high concentration and is proof of its quality.

Eleutherosides regulate the key levers of domestic resource management and use:

Schisandra is a berry traditionally used in traditional Chinese medicine. The first scientific studies were carried out during the Second World War on pilots and submarine crews. Adaptogene included in its formula 2% schisandra with schisandrine, the active ingredient capable of triggering a reinforcement of the body's energy capital. Schisandrine reinforces the adaptation of the physical functions of the brain by its ability to continuously supply the cells with immediately available fuel (ATP: energy cell). It regulates upwards the mood-regulating neurotransmitters: serotonin, GABA, adrenaline, acetylcholine, glycine.

Schisandrine increases work capacity and resistance to physical and intellectual effort. It allows the viability of the cells even in the presence of a small amount of oxygen.