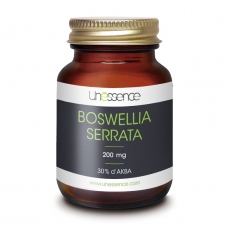 Boswellia, rich in AKBA active ingredients, soothes the body's excessive reactions to bones, cartilage and joints. It also acts on hypersensitivity at the level of the cell membranes of the lungs, intestines and colon. It relieves joint tension and provides flexibility, comfort and joint mobility.

The boswellia is a tree that grows in India from which a resin is extracted. It is a reference product in Ayurveda, India's age-old traditional healing system. Other great civilizations such as Persian, Babylonian, Roman, Chinese and Greek traditionally used boswellia.

Scientific studies tell us that the effectiveness of boswellia depends on its content of active ingredients called AKBA.
Boswellia Unessence has the particularity of containing 30% AKBA.

The mechanisms of action of AKBA's active ingredients explain the effectiveness and the wide scope of application of this magnificent plant.

Boswellia's AKBA active ingredients act on a key lever by regulating a class of aggressive molecules called lipoxygenase-5 (LOX-5). These are mobilized when joints or other tissues are attacked, devitalized or perceived to be so, and will thus exercise their aggression and destruction-promoting activity. A situation in which aggression and chronicity are combined reflects a paralysis and an incapacity of the actors in charge of detoxification to reach a definitive resolution.

The active ingredients AKBA of boswellia extinguish the virulence and the self-sustained reaction of aggression, hypersensitivity and fouling :

The boswellia to the rescue of the joints

The body's reactions are often an excessive and clumsy attempt to neutralize toxins and toxins. When the body is unable to manage them, a healthy inflammation momentarily sets in. Nevertheless, if it persists over time, the presence of pro-inflammatory molecules such as LOX-5 that are found at much too high levels will attack the tissues, maintain the aggression in a loop and lead to tissue destruction.

The active ingredients AKBA of boswellia will intervene to exert a soothing action on bones, cartilage, joints and many other tissues. At the joint level, AKBA acids reduce the degradation of glycosaminoglycans.

In order to fight effectively against aggressions that become phenomena of self-aggression, it is indispensable to act against :

These mediators trigger and maintain the body's first and often excessive reaction leading to the aggression and wear and tear of bones, cartilage and cell membranes throughout the body.

The active ingredients AKBA from Boswellia reduce the aggression and fouling of brain cells: