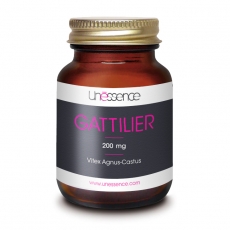 The chaste tree also called Vitex Agnus Castus is the quintessence of plants to accompany a woman at all ages of her life. It is a plant from the Mediterranean basin and Asia. It has been used for more than 2000 years in Europe, North America but also by traditional Chinese medicine in women's monthly disorders. It regulates the balance between estrogen and progesterone produced by the body in favour of the latter. Progesterone brings maturity and stability for the youngest and rebirth for the elderly.

The chaste tree has an affinity for opiate receptors, in particular beta-endorphin, which regulates cycles through its action on the hypothalamus. Following the action of the chaste tree, it will release LH (luteinizing hormone) which will act at the level of the ovaries for a balanced secretion of progesterone.

The chaste tree regulates the balance between prolactin and dopamine in favour of the latter. Dopamine is a neurotransmitter that brings desire, will, motivation. It activates the reward circuits which allows the body to be mobilised.

The chaste tree provides real support for brain function, including memory recall. It reinforces the activity of the hippocampus, an area of the brain involved in the coding of memories. Traditional Chinese medicine, which has been using chaste tree for centuries, also recommends this plant when the nervous system is under great strain.

The chaste tree regulates and tempers the branch of the autonomic nervous system (sympathetic system via adrenaline) which mobilizes and directs the brain towards alertness at first and then towards inner tension.

The organization's resources are stretched and over-utilized in an attempt to adapt. The chaste tree brings a soothing effect on body and mind. It directs the use of resources towards a resolution of the situation.